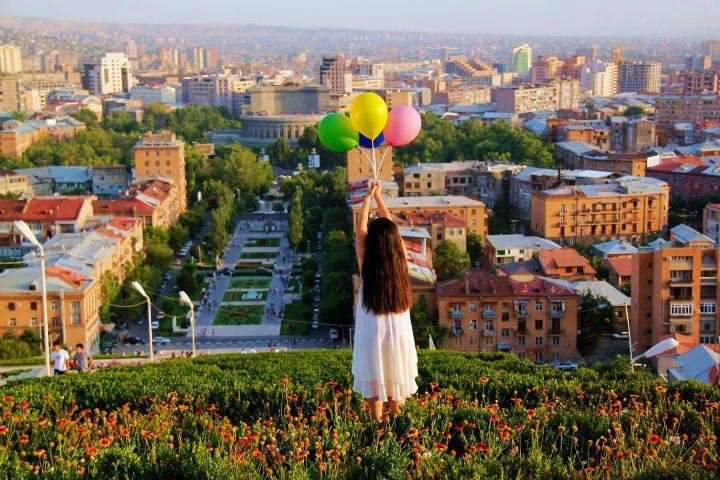 In the autumn our city celebrates its anniversary – the birthday, and all – guests, Yerevan residents – will once again be surprised  at seeing  ancient, but eternally young  Yerevan !
King Argishti I founded the fortress of Erebuni in 782 BC. This date of foundation was carved by cuneiform on a stone slab, which was discovered during excavations in 1950. The fortress is considered  to be one of the few preserved monuments of the heyday of the ancient state of Urartu.
The fortress contains many secrets and mysteries, which are periodically revealed during excavations. Archaeologists managed to find out that the total area of the fortress was about 8 hectares, it had a triangular shape and occupied the top of the Arin-Byrd hill with a height of about 65 meters.
Until now, monumental interior wall paintings have preserved well, the distinctive feature of which are bright colors.
In 2012, Forbes magazine included Erebuni in the list of the 9 most ancient fortresses in the world.

Day 1: Yerevan
Arrival in Zvartnots (international airport), transfer to the hotel. Accommodation in the hotel and rest.   You will have free time for self-acquaintance with the city.
Walking through Yerevan is a special impression. All you need is to wear comfortable shoes and open your heart to our ancient city. In recent years, Yerevan has actively built up: modern hotels, shopping and entertainment centers have been built. And here, much has survived from the old city: ancient churches – witnesses of history, picturesque courtyards and cozy gazebos in parks. There is something to see in Yerevan. Walk along the modern Northern Avenue and around   Swan Lake, near the National Opera and Ballet Theater, look at the Vernissage paintings near the Saryan Monument, relax  in  Cascade Square and go up to the Mother Armenia  statue

Day 2:  Erebuni – Echmiadzin – Zvartnots – Yerevan
Breakfast at the hotel. The first point of our tour is the fortress-museum of Erebuni, where you will get acquainted with the history of the foundation of our ancient city. Then you will have an unforgettable trip to Echmiadzin – “Descent of the Only Begotten” – the spiritual and administrative center of the Armenian Apostolic Church. The Echmiadzin Cathedral is the main temple of the Armenian Church, the throne of the Supreme Patriarch of the Catholicos of All Armenians in 303-484, and again from 1441.
Since 2000, Echmiadzin has become a UNESCO World Heritage Site and it is one of the oldest Christian churches in the world. You can also see the church of St. Hripsime (7th c.) and   the church of St. Gayane.
On the way back you will have an overview of the ruins of the temple Zvartnots (7 century.). Zvartnots in the translation from ancient Armenian means “Temple of Vigilant Angels”, a temple of early medieval Armenian architecture. In 2000, the ruins of the temple and the archaeological site surrounding it were included in the UNESCO World Heritage List.
Return to Yerevan. You can take an evening walk around the city or have a good time at one of the many cafes, bars, pubs or clubs.

Day 3:  Garni – Geghard – Yerevan
Breakfast at the hotel.
You will get acquainted with the historical and holy places of Armenia – Garni and Geghard. Garni is the former summer residence of Armenian kings. The Garni Temple is the only monument in the territory of Armenia that belongs to the era of paganism. It is believed that it was dedicated to the pagan god of the Sun.After visiting the Garni temple, we will continue our excursion to the monastery complex Geghard (12th-13th centuries). The monastery was founded in the IV century on the site of a sacred spring, originating in the cave. Therefore, initially it was called Ayrivank, which means “cave monastery”. According to the legend, the founder of the monastery was St. Gregory the Illuminator. The monastic complex is included in the UNESCO World Heritage List.  A part of the temples of the monastery complex is completely hollowed out inside the rocks. Here, or in Garni, you can watch a master class on baking lavash and buy Armenian national bread – gata. Return to Yerevan.visit armenia tourism

Day 4:  Yerevan is the Day of the City!
Free day – walk, enjoy communication with people, relax, have fun with everyone – just have a great holiday!

Day 5: Lake Sevan – Dilijan – Parz Lich – Goshavank
After breakfast we go to the fairy forests, mountains and bottomless lakes –  to Dilijan. You will see Armenian Switzerland and the miracle of the nature of this region – Parz Lich. From Armenian the name of this amazing beauty of the lake is translated as “Clear” or ” A transparent lake”. The beauty and tranquility of this region will surprise and fascinate you.
Further we will continue our excursion to Goshavank – the monastery – another masterpiece of ancient Armenian architecture. The monastery is located in the thick oak forest of the picturesque district of Dilijan, in the village of Ghosh. Goshavank visit armeniaGoshavank was once one of the main medieval universities with a repository of books.  Armenian, Greek, Latin, some other foreign languages were studied here, as well as music. In addition to the fact that the monastery was an educational institution, manuscripts were created and copied here. Goshavank was built in 1188. Mkhitar Ghosh is an outstanding Armenian thinker, statesman,  an author of numerous fables and parables, as well as the author of the first criminal code,  he took part in the reconstruction of the monastery. In his honor, later, a monastery was named. The majestic beauty of the landscape makes this place one of the most popular tourist destinations.
We will finish this trip by visiting another pearl of Armenia – Lake Sevan. It is not for nothing that they call it the “Blue Pearl of Armenia” – the purity and blue of the water will enchant you when you climb the peninsula. Here you will explore Sevanavank – an example of classical architecture. Next you can dine at a local restaurant and try fresh fish from Sevan.armenia places to visit
Return to Yerevan. Feel the spirit of the evening festive city!

Day 6: Khor Virap – Noravank
Breakfast at the hotel. On this day you will go to beautiful and interesting places – Khor Virap with the majestic panorama of Mount Ararat, and the monastery of Noravank (13-14 centuries), located on the edge of the rocky ledge of a grandiose canyon of red rocks.travel armenia tours
Khor Virap – monastery-fortress – is located on a hill, from where a magnificent view of the biblical mountain Ararat opens. On the old days here was the historic city of Artashat, one of the ancient capitals of Armenia. Khor Virap is one of the shrines of the Armenian Apostolic Church and a place of pilgrimage. This monastery stores many secrets. According to the chronicles of the famous Armenian historian Agatangeghos, Grigor Lusavorich, the founder of the adoption of Christianity in Armenia (301), was in prison here. Grigor was imprisoned in the monastery, where he spent 13 years on the orders of King Trdat III, convicted of professing Christianity.
After visiting the monastery complex, the tour will continue to Noravank. In translation from Armenian Noravank means “a new monastery”. It was built in the 13th century among the beautiful red rocks. The monastery of Noravank is known for its two-story church St. Astvatsatsin. Narrow stone steps on the facade of the church lead to the second floor of the church. Medieval Armenian architects and sculptors showed all their skills and talent in decorating the walls of the church of St. Astvatsatsin. Climbing high above the gorge where the monastery is located, you will feel yourself in heaven, as if extending a hand, you can touch the sky.
When you return to Yerevan – stop in the village of Areni and wine tasting at a local winery.

Day 7: Yerevan – Airport
Breakfast at the hotel. Transfer to the airport depends on your departure. You can continue your stay in Armenia and order additional excursions and get acquainted with other sights of hospitable Armenia.