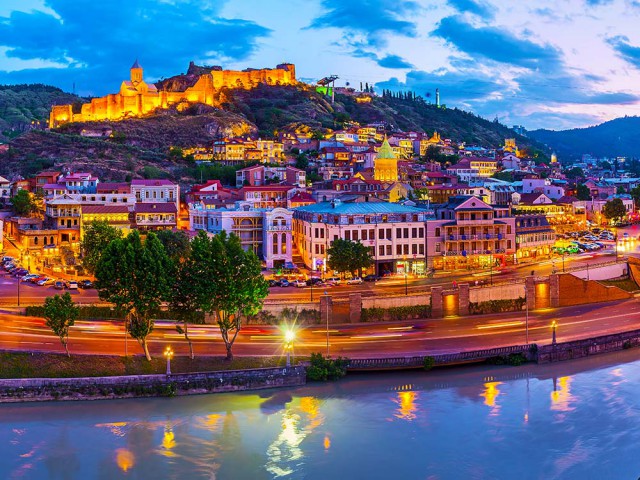 If you want  to visit two ancient  countries in the Caucasus at the same time and feel the greatness of nature and harmony with  universe, then this tour is for you.
The tour  will start in Yerevan. Erebuni fortress, the depository of ancient manuscripts Matenadaran, Tsitsernakaberd, the memorial complex to the victims of the genocide of 1915.  You will feel all  of them  in one breath.
When  visiting  "Ararat",  the famous brandy factory,  you will  enjoy  the deep  taste of  Armenian brandy.
You will incredibly be   impressed  by the only pagan  temple of Garni and Geghard monastery.
In Georgia you will feel the soul of  original Tbilisi with its cozy streets and old houses above the River  Kura,  admire the City of love Sighnaghi and  taste  wine from   the Alazani valley, have master classes on making  churchkhela and mtsvadi.
Unforgettable experiences  are  guaranteed!

Day 1: Welcome to Yerevan!
Arrival and meeting at  “Zvartnots” airport.  Transfer to  the  hotel. After accommodation and rest, you will have  a  city  tour  round  our wonderful Yerevan. You will see the sights of Yerevan: the building of the Opera and Ballet theatre,  the Cascade,  a unique  architectural composition of modern sculptures and square. Then we will go  to the statue of Mother Armenia, where from  a  breathtaking  view  over  the entire city opens.  It’s a great  opportunity to make  photos. The program of the day will finish  with   a welcome dinner in one of the national taverns in the city centre. In the evening you can see  colorful lights of Yerevan on the main square of Armenia.

Day 2: Khor Virap – Noravank – Yerevan
Breakfast at  the hotel. Then we proceed  to  Khor Virap and Noravank,  two magnificent monuments of Armenian architecture.
Khor Virap, a  monastery  and fortress,  is located  on a hill overlooking a majestic  biblical Mount Ararat. In the old days, one of the ancient capitals of Armenia, the historic city of Artashat was  located there. Khor Virap is one of the shrines of the Armenian Apostolic Church and a place of pilgrimage. Gregory the Illuminator    was a religious leader who is credited with converting Armenia from paganism to Christianity in 301.
The  monastery  ensemble consists of two churches. One of them,  St. Gevorg church,  was built by Catholicos Nerses  the  Builder in 642.  The  pit  6 m deep where Gregory  the Illuminator  was imprisoned for 13 years by Trdat  lll,  is  in St.Gevorg  church. The pit has  a domed ceiling, and there   is a staircase  of 25 steps.
The next attraction of our tour is  Noravank Monastery.  Noravank  in Armenian means "new monastery". It was built in the 13th century among beautiful red rocks. Noravank Monastery is known for its two-storeyed St. Astvatsatsin church. The  narrow stone steps on the facade of the church lead to the second floor of the church. Medieval Armenian architects and sculptors showed all their skills and talent in decorating the walls of  St. Astvatsatsin church.  Above the gorge, where the monastery is located, you will feel  like in heavens, as if you  could  touch the sky.
Return to Yerevan.

Day 3: Garni – Gegard – Sevan
Breakfast  in the hotel. Today you will have an opportunity to get acquainted with Garni and Geghard,  historical and sacred  places of Armenia. Garni is a. Garni temple is the only  preserved  pagan monument in the territory of Armenia. According to historical records, Garni was  dedicated to  pagan  God of Sun  and served as a summer residence of Armenian kings(1B.).
The next destination of our trip is Geghard monastery (12 -13 centuries A.D). The monastery was founded in the fourth  century  on the site of  a sacred spring  in a cave. Therefore, it was originally called Ayrivank which means "cave monastery". According to legend, the founder of the monastery was St. Gregory the Illuminator. The monastery complex  is included in world cultural heritage list of UNESCO. The most part of the monastery  is  carved   in the rocks. On the territory of the monastery complex there are numerous khachkars (cross stones) carved in  walls.
After the tour in Geghard we  are offering  you a  lavash -baking master class  in the tourist  centre  "Aya Maria" . Then we will continue our  tour to Lake Sevan,  the blue pearl of  Armenia. You will go up to the Peninsula and  visit  Sevanavank ( 9th century), one of the ancient monasteries  in Armenia.  You will see the amazing picture of Lake Sevan.
In Sevan you will try freshly  caught fish. Overnight in Sevan, in a local hotel.

Day 4: Sevan-Dilijan-Haghartsin-Bagratashen-Tbilisi
Breakfast  in the  hotel. After breakfast you  are proceeding to  Dilijan, so-called  "Armenian Switzerland", where you'll walk through the old quarter of the town. Then you will go to  the fabulous land of wooded mountains and  deep  gorges. You will visit the monastery of Haghartsin. (11-13th AD), the masterpiece of medieval Armenian architecture.
Your adventures in Armenia are going to the end, and Georgian part of your journey is starting. You will proceed to Bagratashen,  the Armenian –Georgian border. You will be met   at Georgian customs,  Sadakhlo  and after customs procedures you will go to Tbilisi. Arrival in Tbilisi. After accommodation in the hotel you will have  a walking tour  around Tbilisi. A charming town built in the 5th century along the twisting valley of Mtkvari River. All the places of interest are very close to each other, within a few minutes’ walk. Start our excursion Metekhi (13th century) plateau, before taking the cable car to Narikala Fortress which dominates the skyline of the Old Town. Proceed to explore brick-domed underground sulfur baths (17th century) – the district of naturally hot mineral waters and discover the hidden waterfall. Afterwards proceed to cafe street Shardeni and walk across the Bridge of Peace which is a stunning design as well as convenient crossing between the newly constructed Rike Park and the Old Town. Visit the stunning treasure of national museum of Georgia. It also provides superb views over the city. In the evening hotel accommodation and overnight in Tbilisi.
Dinner at the national restaurant "Tsiskvili" and the program "Georgian Night". It is a tradition of the Georgian feast and Georgian folk dances, Georgian traditional polyphonic singing. Return to the hotel.

Day 5: Tbilisi – Bodbe – Sighnaghi – Velistsikhe – Tbilisi
Start our drive to Kakheti region Georgia’s premier wine-producing area and visit Monastery of Bodbe - final resting place of Saint Nino, "Enlightener of Georgians", who preached Christianity in Georgia with a vine cross in her hand. Afterwards head to Sighnaghi – a small beautiful city that opens to visitors the magnificent views of the Great Caucasus Range. This little town is a rare example of historic city which kept its style during the centuries with open traditional balconies, unique fortress with churches built in it and towers. Afterwards drive to Velistiskhe. Discover the old and traditional art of winemaking using the winepress and the Qvevri (egg-shaped earthenware vessel in which wine is fermented and stored in villages and towns throughout Georgia. UNESCO Intangible Heritage since 2013).Return back to Tbilisi.

Day 6: Tbilisi – Gori – Uplistsikhe – Mtskheta – Tbilisi
After breakfast at the hotel, proceed along the Silk Road and arrive in Gori - the birthplace of the Soviet leader Stalin. Photo-stop at the museum of Stalin and proceed to the cave town Uplistsikhe (1st millennium BC) - one of the first cities in Georgia carved into the rock. The caves were the site of pagan rituals, before Georgia became a Christian country. After inspecting the cave city, head to Mtskheta – an ancient capital of Georgia, important religious centre and city-museum which is inscribed on the UNESCO World Heritage List. Along the way we will stop on the top of the mountain, at the confluence of two rivers – Mtkvari and Aragvi. Arrive in Mtskheta. Walk along the narrow streets with souvenir shopping possibility and visit its important sites. In the evening drive back to Tbilisi. Hotel accommodation and overnight in Tbilisi.

Day  7: Tbilisi – airport
Breakfast in the hotel. Depending on the time of your flight home  you will  be transferred  to the airport.

The price of the program includes:
- Accommodation in 4* /5* hotels on BB base
- All the transfers according to the program
- English(Russian) speaking guide service
- Entrance fees
- Master-class of lavash baking in "Aya Maria"
- Meals in Georgia: dinner in Wisqvili, lunch  in Velistsikhe.